After my wife, Myra, and I purchased tickets for our recent vacation in London, I was doing some research for the trip online and learned that the BUZZCOCKS were playing a free in-store concert at HMV’s Oxford Street location.

For the uninitiated, the Buzzcocks are one of the original punk rock bands and easily one of the best. Combining breakneck speed, memorable melodies, and insightful lyrics about love, life, and the human condition in general, the apolitical Buzzcocks remain vital 30 years after they helped forever change the face of popular music. Although the word “legend” is one of the most abused words in music criticism, it definitely is an apt description for this British group. 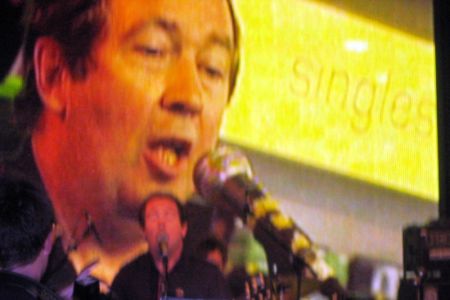 This concert was part of a MOJO magazine promotion to plug its Honours List. The Buzzcocks were nominated for the “_MOJO_ Inspiration Award.” And on June 5th, MOJO announced that the Buzzcocks had indeed won its category. Bravo!

I have seen the Buzzcocks a number of times and they never disappoint. To some extent they are like one of those old wind-up dolls, where you turn the key in its back a few times and then let it march forward until it walks into a wall or some other object, always pressing forward. Once the band starts playing, it’s all business with little or no talk, just like the RAMONES.

It was odd seeing the Buzzcocks play in a record store, but I’m not about to complain. The band came on at about 7:15 PM. after the ARCHIE BRONSON OUTFIT played (I only caught a few minutes of them but they sounded good). 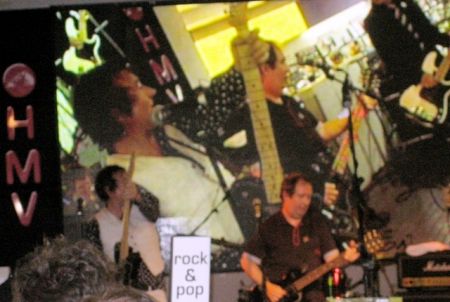 I thought the Buzzcocks might tone it down since they were in a record store, what with tender-eared tykes in attendance—but that seemed to matter little. Their razor sharp attack was as fierce as ever. These old warhorses charged ahead at full gale for roughly 45 minutes with their images broadcast above on a large screen.

The band played some songs from their newest album, Flat-Pack Philosophy, which continues to impress with repeated listens. They also produced a blistering version of their excellent single “Wish I Never Loved You” as well as the catchy STEVE DIGGLE song, “Sell You Everything.”

Many musicians with three decades experience look as if they’d rather be anywhere but on stage. Not Diggle, who always is a pleasure to watch. With his radiant bulldog grin, he genuinely looks excited and grateful to be playing—even in a record store. 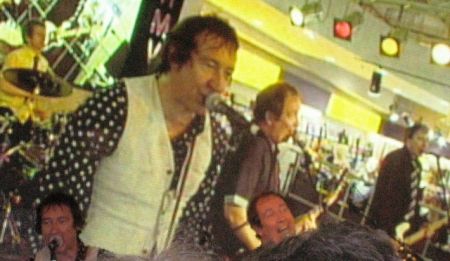 We also heard inspired performances on old classics like “Fast Cars,” “I Don’t Mind,” “What Do I Get?,” “Love You More,” and “Boredom.”

The Buzzcocks are currently working their way through the U.S.—including a show tonight at New York’s Irving Plaza. Be sure to catch them while they are still playing at the top of their game.

Discuss this review in The Big Takeover Forum