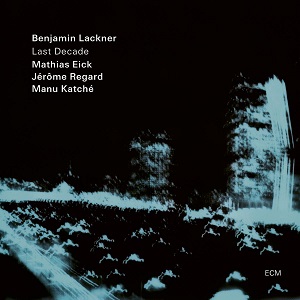 Born in Berlin and based in the U.S., pianist Benjamin Lackner has led several ensembles throughout the years, including his eponymous trio. Last Decade is his ECM debut. Lackner finds himself in the studio with a quartet of notables, including drummer Manu Katché, trumpeter Mathias Eick and bassist Jérôme Regard, with whom he’s worked for years. The pianist’s technique points to classical training, especially in passages like the intro to “Circular Confidence,” but there’s a subtle bluesiness to his playing as well, one that lends a gentle swing to songs like “Last Decade” and “Camino Cielo.” But it’s the quartet’s close relationship with melody that proves the driving force here – Lackner and Eick’s way of caressing a line, buttressed by Regard and Katché’s ultra-tasteful touch with rhythm, makes “Open Minds Lost,” “My People” and “Hung Up On That Ghost” the kind of tracks that, just when you think they’re too caught up in their own atmosphere, sneak into your skull and hit the hum button. Though consistent in recording and performing, Lackner has spent much of his career off the radar – Last Decade looks likely to change that.