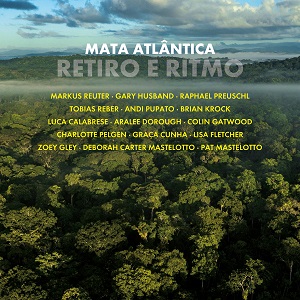 Mata Atlântica is a rainforest on the coast of Brazil, and is one of the most species-rich biotopes on Earth – as well as one of the most endangered, with 90% of it already destroyed. Mata Atlântica is also a musical project assembled by co-producer and co-composers Mathias Derer and Markus Reuter, following the former’s visit to the rainforest on the invitation of German nature photographer Markus Mauthe, who also provided graphics. The debut album Retiro e Ritmo exists in order to raise awareness of the precarious position in which the forest now resides.

Centered around field recordings from Mata Atlântica, an international band of musicians and guest vocalists (including fusion king Gary Husband, Swiss drum genius Andi Pupato, Italian bassist Raphael Presuchi and Reuter himself on synthesizers and electronics) create tracks that proffer an exceptionally alluring blend of Brazilian rhythms, shimmering electronica and atmospheric jazz fusion. Incorporating a poem from Lord Byron, “Se Deus Quiser” unfolds like an outtake from Bitches Brew, in part due to the soaring pocket trumpet of Luca Calabrese. “Candles in Brazil” repurposes a poem by Emily Dickinson through vocals by Graça Cunha and Charlotte Pelgen and a busy arrangement that emulates its setting on a sunny day. Featuring vocals from Zoey Gley and Lisa Fletcher and woodwinds from Brian Krock, “Sempre O Mesmo” immediately draws us into its lush and groovy world. Joined by Pupato and a plethora of birdsong, Reuter closes the record with his signature touch guitar soundscaping on an extended ambient piece.

Mata Atlântica’s existence is predicated on the peril in which its eponymous source finds itself, so any attention it gets can only help. Fortunately, the music is itself compelling as well, making Retiro e Ritmo worth the spin.