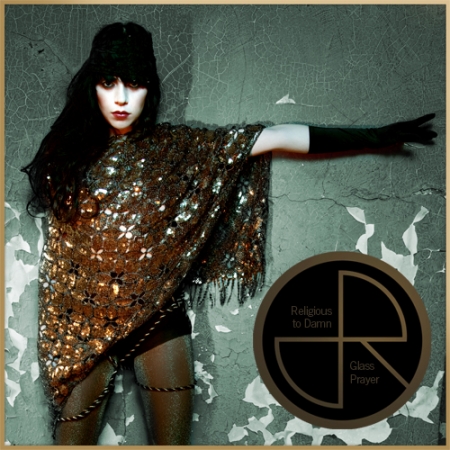 Religious to Damn‘s first full-length opens with a whispered roar. Strains of acoustic guitar and cymbals introduce “To Love the Machine” in a deliberate slink as ZOHRA ATASH‘s ethereal vocals melt into the mix. Here and throughout Glass Prayer, she manages a restrained power that’s weightless without weakness, showcasing her lithe soprano in a tease that’s never too forceful. The first track ends with a metallic echo, seamlessly transitioning into the next.

What’s evident even early into Glass Prayer is its wholeness. The deliberate continuation between songs, like a good old fashioned dance record, is not something you hear much on modern rock releases. The result is the feeling of a full album, not a string of singles as is often the default today.

While the sound Religious to Damn create has aural antecedents in Cocteau Twins, Mazzy Star, Fleetwood Mac and their ilk, there’s a more nuanced narrative playing out in the music. “Drifter” picks up with a driving, semi-psychedelic groove, and the chorus is layered with guitarist JOSH STRAWN‘s backup vocals to great effect; it’s a less common pleasure to hear a woman on top in the mix with a supporting male voice beneath. On the title track, Atash keeps the fires burning with a punchy vocal melody as a striking bassline subtly prowls by, and “Black Sand” brings the spacious atmospherics with its slide guitar sprawl. Adding depth with her expressive contralto, Tamaryn‘s guest appearances on “Let the Fires Burn” and “The Bell” are also of note.

Stylistically, Glass Prayer offers up everything from acoustic folk and dreampop to hard rock, all channeled through washes of tempered passion. As the heaviest track on the record, “Terra” shows off Religious to Damn’s versatility: Strawn’s galloping vamp is reminiscent of a reoccurring theme on Pink Floyd’s The Wall and the drums hit hard as Atash breathily repeats “a heart that bleeds does not deceive.” The song unravels in epic fashion, ending with a forceful fade out.

Like many great records, a perceptive peeling back of the layers will reveal new and captivating details. Whether it be a percussive chime or a perfectly dissonant harmonium line, it’s the hidden treasures that make Glass Prayer so memorable. Mesmeric pleasures abound with each and every listen.

Catch the band live at Lit this Sunday, and check out the entire record, now streaming on MySpace.