David Bowie - The Man Who Sold The Future 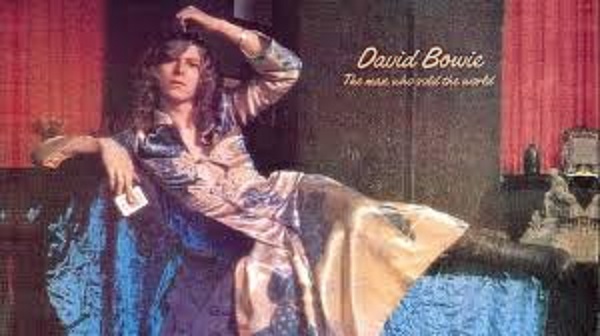 Fifty years ago, in July 1969, David Bowie released the groundbreaking “Space Oddity” single. As the music world waited for a similar tune or collection of folk-tinged psychedelica, what Bowie did next was something even the hierarchy in the business did not anticipate. His attention focused towards the full rock band sound, in turn creating The Hype, an early incarnation of The Spiders From Mars. Consisting of Bowie’s two main foils of the day, producer Tony Visconti on bass and the late great Mick Ronnson on guitar. Finally adding future Spiders drummer Mick Woodmansey to complete the lineup.

With this backing band, the young David Bowie relocated to Trident Studios in London to lay down the foundations for future sub-genres of rock, including Goth, Grunge, Indie and even Metal. This was the ignition of Bowie’s classic string of seventies albums, the genesis of it all. While The Man Who Sold The World may not top the category of the best David Bowie albums, it should certainly be categorized as his most influential and important work. His very own The Velvet Underground & Nico moment.

With its sonic driven and heavy guitar work, the resulting album took only a month to record. Between April and May 1970, the tracks were laid down produced and mixed. That one month in time had a lasting appeal which has resonated through the following five decades. The influence noted with a rediscovery, when on the 1994 album MTV Unplugged, Nirvana performed a version of the title track. Indeed, the influence of the album inspired elements of work by Siouxsie and the Banshees, The Cure, Gary Numan and even Nine Inch Nails.

In reality, The Man Who Sold The World could easily be a Mick Ronson solo album, as much as a David Bowie album. His guitar work dominates the album, from the simple effective riff of the title track, the pure sleaze grunge driven “She Shook Me Cold” ,and the albums opener “The Width Of A Circle”. The latter contains one of the finest solos Ronson recorded, a feedback driven masterpiece, effective and controlled. The perfect centerpiece to David Bowie’s lyrics, his ego less stance while letting the band work their magic.

”His nebulous body swayed above
His tongue swollen with devil’s love
The snake and I, a venom high
I said do it again, do it again
” -“The Width Of A Circle”

The albums opens dramatically, starting slowly with a phased out acoustic guitar and a simple riff, before it takes off with a juggernaut of an explosive assault. Highlighted with feedback screeches behind Bowies vocal, direct and menacing, snarling through lyrics. Lyrics which may or may not make sense depending on the listener, but like so many other Bowie recordings it’s all in the delivery. “All The Madmen” Bowie’s take on the descent into madness and begs the question of who are the more insane? Those locked up in asylums or those free to roam in society. Perhaps a backwards glance at his influence Syd Barrett ,who he paid tribute to the on future release, 1973’s Pin-Ups.

“Black Country Rock”, the limp branch on the tree which gives a breather to the album, a Marc Bolan inspired, early blues and glam rock blend. Deadly with its simple repeated lyrics, encapsulating all that glam was. But although the music was nailed before the studio, the lyrics were added at the last minute, which adds to that loose and free sound. The closing vibrato in Bowie’s voice is a true tribute to Bolan a close friend and competitor.

“After all” is Goth meets sixties rock, this time by way of occultist Alister Crowley. With talk of mystic re-births and so on, again the dark themes that echoed on the previous track continue here. A sinister childhood nightmare made real against a waltzing score. Pushing boundaries of taste, and what the listener will languish in has always been a talent of Bowies. The following two tracks,”Saviour Machine” and “Running Gun Blues” delve into the concept of war, and the talk of the day which was Vietnam. Bowie takes the view of victims coming home from war, both shell-shocked and obsessed with killing to the point they don’t want to stop. These themes are strong they are still not as disturbing as the circus hell that is “After All”.

”I had no time to spare, I grabbed her golden hair
And threw her to the ground
Father, she craved my head, oh lord, the things she said. My god, she should be told” -”She Shook Me Cold”

Drenched in an immoral context, “She Shook Me Cold” is a song that puts other guitar bands of the time to shame. It’s brilliance lies in its hard rock glory, and Mick Ronson’s guitar which screams as if part of some forced sexual encounter. Leading nicely into the title track, “The Man Who Sold The World”. A song’ which for David Bowie at this point in his career is significant as it deals with personal self discovery “I searched for form and land” along with an almost schizophrenic view of life “We Never Lost Control”. A character building exercise in which Bowie would immerse himself all in with two years later, and the birth of Ziggy Stardust.
The closer and still keeping within the albums theme is “The Supermen”. An apocalyptic vision styled from Friedrich Nietzsche or simply Bowie using sinister imagery once more of how everything must die, even Gods.

The album regardless of its packaging, is still a true beast of seventies music, not alone Bowie’s catalogue. Whether it is that UK man-dress cover, the US cowboy cartoon-style, the German winged head or the black and white 1972 Ziggy-style sleeve. The Man Who Sold The World contains the same musical journey, and created the same influence, ultimately not just an album, but an experience.