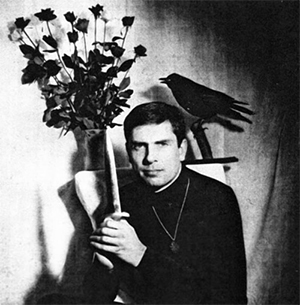 I’m extremely worried I’m about to become the Devil’s Advocate here. The argument over whether Death In June promotes racist, fascist, and sexist opinions has been around forever, but rarely is it approached from a level-headed point of view, from either side. I can’t guarantee this is what I will try to present for I’m not sure if it’s possible for me to be level-headed, but it does seem the overriding opinions range from detractors disparaging the work of the band as a canon of outright Nazi propaganda to supporters of the band who deny the connections outright without understanding the implications.

The problem is that those opposed to the band have their hearts in the right place and their ideologies are certainly correct, but they often know little about the band to make a proper argument or provide any valid evidence, while supporters of the band have little proof themselves and often resort to declaring that leader Douglas Pearce is gay and has played with Jewish musicians and in Israel, so it’s impossible for him to be a Nazi or an anti-Semite. It appears as if every argument about the band, whether for or against, is only a step away from being written in ALL CAPS and punctuated with a million exclamation points!!! before dissolving into pure, incomprehensible profanities.

In reality, the answer, as it often is, is lodged somewhere between the two extremes. When my best friend Melissa turned me on to Death In June, I myself was hesitant about listening to the band, and anyone with any sense should be hesitant about following a band that brazenly makes references to the Holocaust and uses Nazi iconography. However, upon reading and listening to what Pearce and various associations of his actually have to say, it quickly becomes clear that the answer is not so obvious. To say Douglas Pearce’s music is “pro-Hitler” oversimplifies a complex and less than clean cut matter.

It’s easier for an American audience to criticize Nazi imagery in music, because the effects and results of Germany’s involvement in World War II are not as directly visible in our country whereas it was a very real part of everyday life in the UK for years. So much so it became commonplace, even if the intention was to shock. British bands like Joy Division, New Order, Siouxsie and the Banshees, and Throbbing Gristle all made references to or use of Nazi iconography. The Ramones are even well known for songs like “Today Your Love, Tomorrow The World” because finding Nazi helmets and weapons from WWII amongst the rubble of tumbled buildings was part of Dee Dee’s early life in Germany.

Pearce’s apparent obsession with Nazi imagery is a result of that everyday exposure, and it is still so shocking for most that his prevalent use of Italian, Medieval, and Pagan symbolism is overlooked. But because it is shocking to see Nazi symbols presented so blatantly and carelessly, that doesn’t mean it’s necessarily wrong or right. The Holocaust, like all great and numerous mistakes in humanity’s brief existence, shouldn’t be forgotten, and to present evidence that it indeed happened, no matter how brash, is actually the opposite of Holocaust-denial. Only from acknowledging its existence and being reminded of it in a ritualistic and continual manner can we progress as a society and understand how truly messed up we are.

This doesn’t mean the use isn’t somewhat insensitive, nor does he have total right or freedom to use them at will as he does. Because Pearce or punk bands that used the imagery weren’t directly and undeniably affected (exposed, yes, but not affected) to WWII and because he isn’t Jewish, he will never fully understand the true power and pain behind those symbols. Kurt Vonnegut frequently made references to World War II and featured drawings of bombs and swastikas in his work as well, but he, unlike Pearce, directly served in WWII and witnessed the firebombing of Dresden firsthand while a prisoner of war. However, although he did use that imagery vividly in his novels, he was also a famous and staunch pacifist and humanist.

The problem with Death In June, and it’s really more carelessness than a mistake, is Pearce’s complete ambiguity in most of his lyrics and interviews. The origins of Joy Division’s name—a Nazi concentration camp’s prostitution wing—has never come into play because Ian Curtis wrote clearly and obviously about his own depression, isolation, and sense of failure. In one aspect, an artist shouldn’t have to explain their work, but in another, whenever there’s any hint of possible anti-Semitism, racism, or misogyny, ambiguity is certainly not the best or brightest idea. That’s where Death In June went wrong.

There have been speculations that this uncertainty is a deliberate ploy to get people to listen to his music more, but whether or not that is true, this uncertainty has distracted attention that should be focused on how beautiful his music can be. Perhaps, his music is intended not to refract onto himself but reflect upon you, the listener. If you want to find a Nazi agenda in his music then you probably will, but then that should cause you to examine yourself, because the opposite of a strong opposition can just as easily be found in the same lyrics.

So, is some of Death In June’s music in bad taste? Yes. Is some of it questionable or enigmatic in its intentions? Sure. Is Douglas P. a Nazi-sympathizer? Hardly; he’s just not very wise sometimes. In fact, the way he’s acted in interviews can even be seen as dumb. Progress always needs a scapegoat, and some, like GG Allin, are more deserved than others. Pearce isn’t GG Allin, and he certainly isn’t Prussian Blue or Skrewdriver. White supremacists never miss an opportunity to vocalize their idiotic opinions, whereas Pearce rarely gives interviews and when he does, he often makes little sense.

Unfortunately, from his efforts to separate himself from his time spent in Crisis, it’s obvious Pearce isn’t as liberal as one would hope to be, but neither is his use of the Totenkopf and other related imagery the benediction of the Nazi regime. And yes, it’s unfortunate he has had associations with people like pro-rape, totalitarian Boyd Rice, because it certainly doesn’t help his case. Most likely, as he has hinted at, Pearce is just another confusing-as-hell libertarian, and the accusations against him will continue to and always will exist.

Although the intentions could be clearer, Death In June’s music can be as beautiful and elegant as it is painful and uncomfortable. The execution isn’t always perfect and even a little misguided at times, but if Death In June is about anything, it is an attempt to reestablish and display the inalienable connections between the bright and dark events in our history and show how inseparable the two are, because without barbarity one cannot appreciate beauty for its true value.

A Tale of Two Record Stores