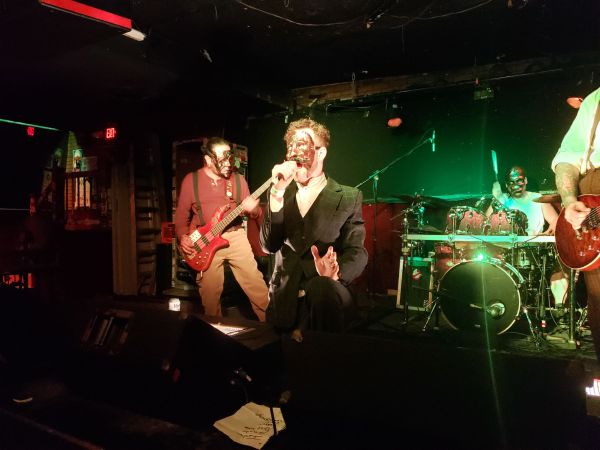 If you could imagine Metallica thrown in a sonic blender with Ween, Queen and Rush, it’s possible that what you might get is punk-metal mavericks Arsenic Tea Party have, who will be releasing The Really Not Good Times EP on February 14.

Today we are pumped to premiere the video for the track ’12 Gauge Exit Strategy’ (created by Jacob Glover). This is raucous adrenaline overdrive, but it is also highly melodic with a series of clever change-ups. A talented and entertaining offering for people who like to shake things up with an artist who blurs the barriers between several musical genres.

The lyrics music video is an oddball sight to behold, featuring an animated gopher-like animal in a robotic suit, clutching a human in his mechanical hand while cityscape in flames surrounds them. The jaunty metal-pop hybrid is filled with heavy guitar riffage and peppy horns, as well as melodramatic devil-may-care vocals.

Formed in Flint, Michigan in 2019 as a solo project, Arsenic Tea Party today revolves around the duo that is Richard Cynic (vocals, drums, keys, guitar, lyrics) and Ron (Ryan Szewczyk) of Downtown Brown fame on guitar and bass.

An apolitical Rock and Roll outfit dedicated to “poisoning” the minds of honest folk with positive, nihilistic cheer, Arsenic Tea Party exists to make noise and make it fun for everyone – to make things less painful. There’s a certain level of whimsy,and levity in this avant-garde metal. At times sardonic in subject matter, this simple but high-energy music has got hooks, and utilizes a wide range of instruments and styles.

Debuting with their eponymous LP in mid-2019, it’s been a full year since they released their next single ‘Homesick For Hell’.

“Personally, we both have gone through a lot of very strange and terrible things the past two years. From struggling with health issues, losing homes and livlihoods, getting shot and basically coming back from the dead, the pandemic, missed opportunities then, and now, major depression…you get the picture,” says Richard Cynic.

“This release, and its future sister release, is an attempt to make sense of the fact that there is no good sense in any of this – and I guess to poke fun at serious issues to minimize their power. Kind of like how a mother bird will regurgitate food for her offspring. This EP is just a sardonic outlook on the absurd nature of everything that is the present or that could be the present – I don’t like to date things, haha.”

“We recorded this release in our homes respectively. Just a homegrown record. I handle the Vocals, Drums, Keys, and Guitar, and Ron handles both Guitar and Bass. For a brief period, ATP had live players, but that was short lived. We aren’t in much of a hurry to play live given the circumstances, but we do have prospects and interested parties who are practicing our songs as we speak.”

As of February 14, The Really Not Goot Times EP will be available digitally everywhere. It can already be pre-ordered via Bandcamp. There, you’ll find 12 Gauge Exit Strategy is being offered as an instant gratification download (or you can get it via the band’s store HERE)

Just a few months ago, they duo teased ‘Tommy The Cop’, also found on the new EP