It’s a common belief that bad things come in threes. For Chris Forsyth & The Solar Motel Band, that theory just doesn’t hold up. Former Brooklynite and current Philly resident Chris Forsyth and his band (featuring Peter Kerlin, Paul Sukeena from Philly deep thudders Spacin’ and Steve Urgo, formerly of The War on Drugs) are countering this aged idea successfully at every turn, beginning with the release of Solar Motel on October 29th, 2013 .

The record, put out by rising North Carolina label Paradise of Bachelors, has received numerous accolades for its reinvention of the underground rock sounds originally designed by Television and The Grateful Dead. The LP itself is a four piece suite of lucidly giant guitar jams that run from poignant to damaged in a moment’s notice. Christopher Smith of Paradise of Bachelors talks about the freedom the release allowed the label early on, “The album sort of broke the mold a bit in terms of our early roster of releases. It was great to open up the gates a bit and show folks more of what we like.”

Six months after Solar Motel came the release of Solar Live 11.15.13. Arriving on Record Store Day (April 20th, 2014) courtesy of longtime WFMU DJ John Allen and his Electric Ragtime label, the document was recorded on November 15th, 2013 at The Rotunda in Philadelphia and is the first to be credited as Chris Forsyth & The Solar Motel Band. Allen explains the release on ER, “When Chris put a band together to play the record, his musical vision took on a new life. I felt that people who discovered Solar Motel ought to hear this development.” 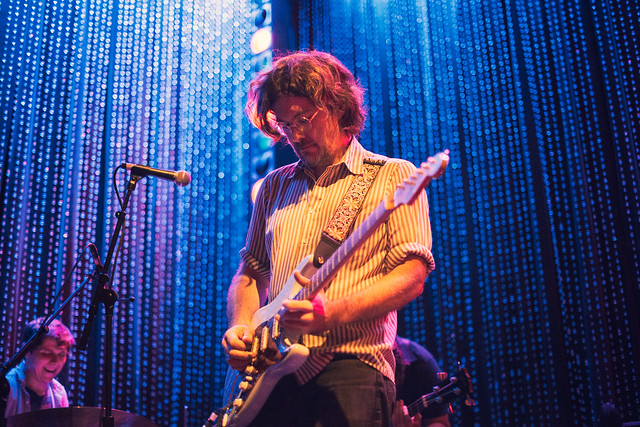 As far as Forsyth is concerned, he sees both Solar Motel and Solar Live 11.15.13 as two sides to the same coin, “I think those records are cool as companion pieces – you can hear how the material mutates in the hands of different players.” Longtime collaborator/bassist Peter Kerlin says, “It’s about making music spontaneousIy in front of an audience and using Chris’ compositions as a framework for expression. The major drive behind Chris putting this together was wanting to perform with a set lineup that could play off each other in a live setting and grow together as a band.”

October 28th, 2014 (one day shy of the release date of Solar Motel the previous year) will complete SMB’s adverse rule of three with the release of Intensity Ghost on No Quarter Records. When asked how the release found a home on No Quarter, label owner Mike Quinn says, “We had talked a few times about maybe working together, but timing was never right. But when he sent Intensity Ghost I instantly liked the record. It seemed like something that could really connect with people.”

With three mammoth records coming out in under a year, it could seem like this group is creating at breakneck speed but Forsyth himself says that several of the compositions on Intensity Ghost aren’t new at all. “‘Yellow Square’ I wrote in 2012 to perform with Steve Gunn at the Kensington Picnic. “I Ain’t Waiting” was co-written in 2009 with Shawn Edward Hansen, who played keyboards on Solar Motel, Solar Live 11.15.13, and Intensity Ghost. Hansen lives in Kansas City, so he doesn’t tour with us, but he’s a crucial element in the studio. The title track is a song I wrote in 1994.” The album closes with “Paris Song” – a stunner written for Lou Reed while Forsyth was on the road overseas. “I was on tour solo in Europe and played in Geneva, where I heard that he died. The next day I traveled to Paris and was thinking about him all day, meditating on that fact that he is like the fountainhead of everything I do. He’s my Robert Johnson. I was thinking about the way he played with Robert Quine on The Blue Mask and that song just spilled out in like 15 minutes.”

“The best music has a kind of ecstatic intensity that burns through it. It’s this essential force that, for me, is about existing in the present moment to the maximum degree, and just burning to live,” says Forsyth. He is without speculation making his greatest musical contributions right now, playing deep compositions that contain infinite emotion and passion with a consciousness that could only come from the powerful unit that’s been assembled. When asked if the Solar Motel Band are the newest reason for the reexamination of the electric guitar, Forsyth says, “What’s more important is what we’re going for. I could be singing or playing keyboards or saxophone and for me it’d be the same goal. I just happen to be a guitarist in a rock band.”