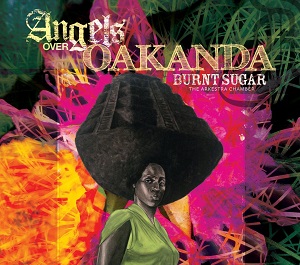 Led by conductor and composer Greg Tate and bassist Jared Nickerson, Burnt Sugar the Arkestra Chamber (henceforth merely Burnt Sugar) is one of the most unusual ensembles treading the boards. Not so much because of its sound – its freewheeling and organic blend of spiritual jazz, cosmic funk, propulsive Afrobeat and soul harmony is, oddly enough, somewhat common these days. What makes Burnt Sugar stand out is adherence to the principles of conduction, a method of leading a band developed by the late composer Lawrence “Butch” Morris that allows an improvising company to maximize its skills while sticking to the piece’s structure.

Not that anyone unfamiliar with the method will notice, mind you. Once the title track of Angels Over Oakanda, the aggregate’s seventeenth album, kicks off, we’re drawn to the groove. Distorted electric guitars, multiple horns, electric piano and a battery of percussion crowd the space, but leave room for the rhythm to hit ‘em in a way that denies clutter. At nearly nineteen minutes, the piece moves through a few iterations, but never interrupts the flow of bitches brew. If this song were released on vinyl, it would be the whole of side one, and more likely to be repeated before the record gets flipped over.

Also an epic, “Repatriation-of-the-Midnight-Moors inna-OAKANDA” (a title guaranteed to give editors fits) mixes chanting harmonies and swirling flute with programmed beats and electronic textures, as if the band was remixing itself as it played. “Oakanda Overdrive” follows suit with “Angels,” though with more emphasis on jazz improvisation, while soulful singer Lisala takes the minimalist groove of “Repatriation” and makes her own for three minutes. Both tunes seem to cover what’s already old ground, but they’re definitely variations on a pair of themes, not idea recycling. Even if they were, though, it would make sense – the jazzfunkbeat mantra at the heart of Angels Over Oakanda needs expansion less than it needs conviction. All is groove, all is groove.