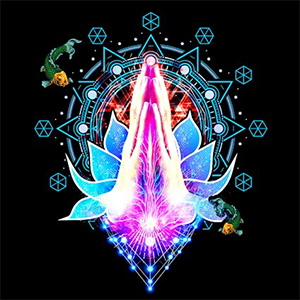 Detroit, Michigan psych-pop group Jobbaloon aim to recapture the audiovisuals of late-60s psych with lights and video projections in their live shows, and although these things are always lost on record, their new album The Invitation nevertheless replicates this feeling of an immersive experience. Positioning themselves in firm opposition to the city’s legendary garage rock scene, while simultaneously deferring to it, the band has one foot firmly in the past of psychedelic-era Beatles and the other foot in the modern dark pop of Billie Eilish. In fact, the band repeatedly plays comfortably with contradictions, as the album cover suggests a spirituality that is betrayed by the sinister undertones in their music.

There are only eight songs on this slim release, but singer and instrumentalist Joshua Achatz covers a ton of ground in a short amount of time. Songs like “Bm” and “Days” grow, evolve, and explode with such complex baroque flourishes that the end often barely resembles the beginning. This merging of the 60s with the modern day creates a sound not too far off from the alt rock of the 90s, especially on a song like the moody acoustic ballad “All I Need,” while the beats on others like “Am” make it unmistakable what year we’re in. The Invitation subtly grabs bits and pieces from so many different influences that ultimately it sounds like nothing else out there, and it’s a remarkable example of an artist both rejecting and welcoming trends, creating something uniquely their own in the process.