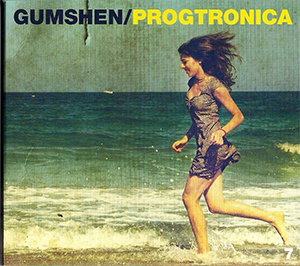 With an album title like Progtronica, it definitely seems like Gumshen is trying to invent a new genre, and they certainly attempt it here. Some may scoff at blending the genres of prog and electronica, like some may not like mixing their peas with their potatoes, but it’s a blend that works for the most part, sounding like a fascinating hybrid of Kraftwerk and Pink Floyd or Yes. This Seattle band has made a bold statement with this new release, and although not perfectly executed it’s definitely worth checking out, problems or not.

Unfortunately, the vocals and the music do seem at odds with each other at times. Both are fine and well-suited on their own, but together there’s something of a clash. Ironically, the odd person out on Progtronica, the folk-leaning “Fine One To Talk” is actually the one song best suited for the vocals. The problem is, Gumshen sounds as if they’re not always sure what they want to be, whether it’s progressive, synth-pop, or dub step even though it’s intended to be a blend of all three. On songs like “Bell Ringer” and “Stipulation” they sound at their most comfortable, and the pop of it all is infectious, but when they step out of the formula it becomes iffy.

Overall, Progtronica is a highly ambitious album. It doesn’t always succeed, but it’s definitely worth paying attention to. It pays off in the end to stick with it and find the truly great moments on the album, because they definitely exist. It’s only a matter of a little digging, and one will definitely be pleasantly surprised. Nowhere is this more evident than on the eight minute album closer “Fragile We Are Castles,” a fascinating instrumental constantly transforming and re-imagining itself, a lot like the band that created it. Progtronica will be released February 11th.