Sam Levin - I Am (Clarence Productions) 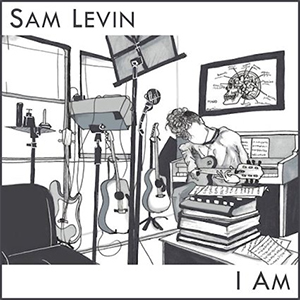 New York indie musician Sam Levin is back with another collection of deceivingly unassuming pop with his sophomore full-length simply titled I Am. The songs are densely produced with delicate layering, but rather than a large cast of revolving musicians, the focus is still predominately on Levin. His backing vocals play an integral role with complex arrangements, and even his own hands are responsible for a large majority of the album’s percussion. There’s a real physicality to the recording, and it’s about the closest one can get to a capella without actually stripping it all of the instruments.

The title track, “I Am,” is a rare piano ballad amongst a predominately acoustic album, but Levin truly excels with the guitar tracks from the breezy “Five Fortunate” to songs that show off a sweet and tender side like “Carbon” and the superb “With Love and Compassion” where he sings with an unaffected naivety few others could pull off. The harder edge of “First World Problems” and the electronic “Common Sense” serve mostly as punctuation to add some variance to the album, but it’s filler in a quality album devoid of typical filler. I Am ends up as the perfect title for what is essentially a quietly confident manifesto on a deeply personal level.