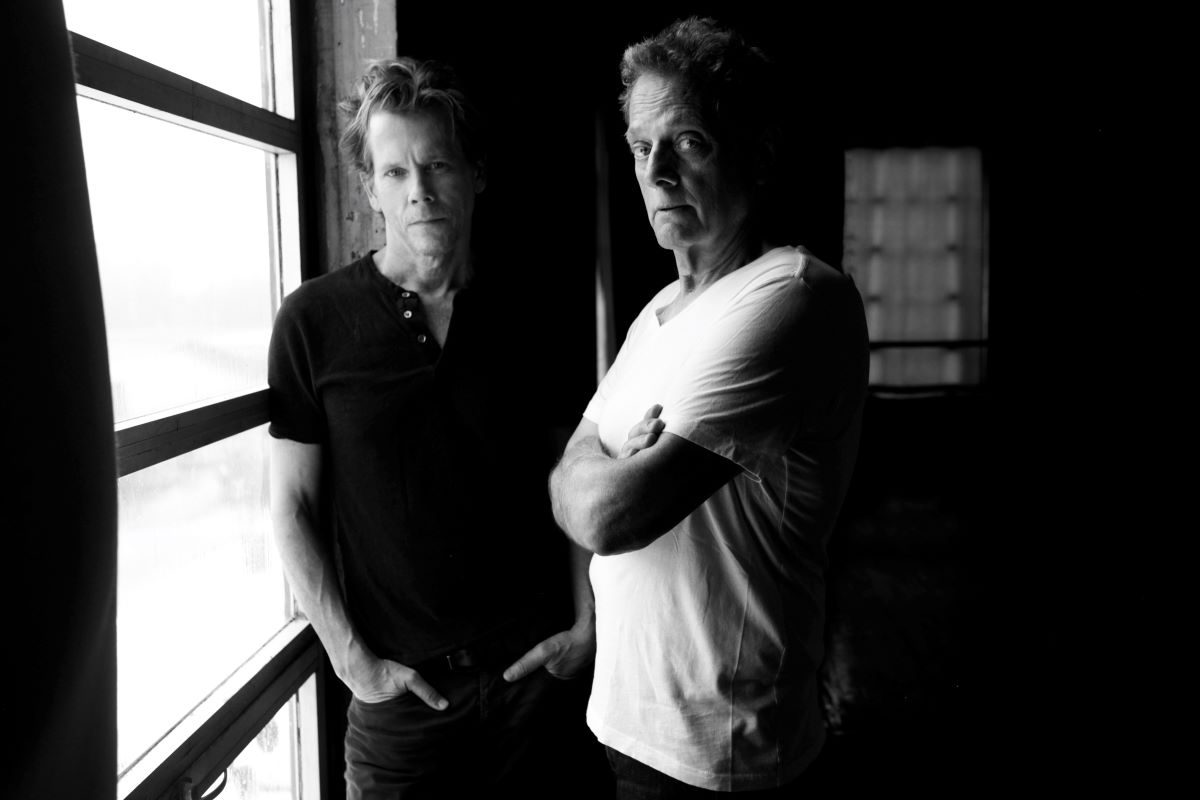 You’ve probably seen Kevin Bacon acting in one of his many hit films (Footloose, Apollo 13, Mystic River, and many more) – but you may not know that he’s also quite an accomplished musician. He and his brother, Michael Bacon, formed the rock band The Bacon Brothers in 1995, and put out their debut album, Forosoco, in 1997. (But Michael’s professional musical background goes back even further – he began his career playing in bands in the late 1950s before becoming a songwriter in Nashville in the ‘70s, and he has also composed for more than 100 film and television soundtracks). On July 17, The Bacon Brothers will release their tenth album, The Way We Love. On a recent conference call, both brothers talked about how their childhood in Philadelphia stoked their creativity, how they feel as they approach this latest album release date, and how they continue to stay inspired.

What are you thinking as you approach your album release date?

MICHAEL BACON: Anticipation, a little bit of nervousness – you put it out there and you hope that somehow, this is the one that lightning strikes and that there’s some piece of it that somebody’s going to hear somewhere and go, “Wow, I love that.” The more records you make, hopefully, the better you are, and the better you are, the more chance of putting yourself out there where lightning can strike and the public locks onto [it]. I’m really excited about this record; I think it’s the best thing we’ve ever done. It’s a funny time to release a record. But if you can’t play [shows], you’ve got to think of all sorts of other things to do in the meantime, and getting this record out was kind of a shock to my brother and I that we had enough songs and we were able to get back in the studio to finish it off.

What was your songwriting process like for this album?

KEVIN BACON: I don’t know that it ever changes all that much. We tend to write separately, usually, and then we come up with an idea for how maybe the song is going to sound – what the vibe is, the instrumentation. And then we decide how to approach it. Sometimes we get a chance to play something live for a while. There’s a few songs on this record that we played a lot live. Then there’s some we have never played live. One interesting collaboration on it – I don’t think we’d ever really done it this way [before]: Mike had a song called “Momma Pop Culture” – he had the lyric, so he sent me almost like a spoken word [version] of the lyrics, with a little bit of a rhythm to it. I flagged it in my email and didn’t really look at it for like a year! [laughs] Not because I didn’t like it. I just didn’t really get to it. And all the sudden I was like, “Let me look at that again.” In that case, I wrote the melody to his lyric and created the demo and the vibe of it. That’s been the only one that we’re both credited on, Mike, is that right?

MICHAEL BACON: On this record, yeah. I knew that if I wrote that music to that song, it wouldn’t work. It needed something really edgy, almost punky, angry, dark. I knew that if I gave Kevin the lyrics, even though it took him a year, that he eventually would come up with the right thing.

It seems like bands that contain siblings often can be contentious. How have you managed to avoid that particular pitfall?

MICHAEL BACON: I have to go back to our childhood and the way we were brought up. I think that we were ingrained to have an enormous amount of respect for our brothers and sisters. Four sisters and two brothers, in this case. We grew up in a little skinny house in the middle of Philadelphia. So we had to respect each other. With my brother and I, since we’re nine years apart, we really didn’t have the battling brothers syndrome, which I think a lot of brothers do, where they punch each other until one starts to cry and then the parents come in and break it up. So far, every time Kevin’s punched me, I haven’t cried! [laughs] But I have beaten him in an arm wrestling contest on national television. Or maybe he let me win, I haven’t figured that one out. Back to the brothers: if you decide to start a dry cleaners and you want a partner and you go with your brother or your sister or your father or your mother, there’s just an in-built trust that is never going to exist with someone who’s outside of the family. I look at it like, maybe you have disagreements and maybe you get on each other’s nerves but there’s a very fundamental family connection that is strong, and I think makes it easier to be in a band with a sibling.

What is it that made each of you want to become a musician in the first place?

KEVIN BACON: [Michael] is nine years older than me, and was a trained musician playing cello from the time he was a little boy. He was writing songs. So when you see that from an older sibling, you say, “Well, I think I want to do that.” And the truth is, I would say a lot of people flirt with the idea of becoming a musician. I think a lot of people look at pop stars, rock stars, hip-hop stars, and as a kid you go, “That sounds really good!” Sometimes you go a little bit more toward the athlete thing, or every once in a while, someone says, “I want to be an actor.” But I think a lot of people in America, we are drawn to the power of that kind of music celebrity and we aspire to have a piece of that.

KEVIN BACON: It sure is! [laughs]

How did you know you had it in you to do that?

MICHAEL BACON: For me, I was lucky because music’s the only thing I know how to do. We were brought up in a household that encouraged any kind of the arts. I clearly had an enormous love for music, particularly instruments. When I first started out, I just loved instruments. At that time, mid ‘60s when I was in college, you didn’t go into pop music. That’s not something you did. There was no path for that. You could have fun with it and go to play in a cover band at a fraternity, or something like that. But when the hippie movement hit, all the sudden it was, “Do your own thing” – that really spoke to me. I took some enormous risks to decide I can pursue this. Once I had a kid, in the 80s, I realized that I wasn’t really providing for my family. So I did give up the pop culture pursuit, and I went into film scoring. I became successful with that and was able to support my family. Then, when my brother and I put the band together in the ‘90s, it was like, “Well, now we’re going to write songs and do everything I did since I was 15 years old.” I’m just one of those very, very lucky people that’s been able to survive, knowing how to do nothing but music. Now, I’m teaching it in the City University of New York, I’m teaching film scoring and finding I’m really good at that. It’s a very satisfying thing. It’s a long way of saying I’m incredibly lucky person.

Where did this musical talent come from? Did your parents play music?

KEVIN BACON: Our parents liked music, but they weren’t really musicians. Our mom played a little bit of mandolin. Our dad was pretty much tone-deaf. But creativity was put on a really, really high pedestal. If you could make something or create something, whether it was a piece of art or a song or a dance or a performance, they just were really, really into that, even though neither one of them were performers. For some reason, they both had this thing about art and it was insanely important to them. So it’s not surprising, I think, that we went into the arts in some kind of way.

MICHAEL BACON: I have to add that Kevin’s new song, “Corona Tune,” is a really amazing description of who our parents were. One of the things I love about a great songwriter – which I consider my brother one of those people – is, you can write the song or you could write a novel, and the song will deliver as much meaning and information and background in the few choice words. People are fascinated by celebrities, and in that one song, you pretty much get a bead on my brother’s childhood – and mine, and our four sisters. It’s a great song.

Some people seem to lose their creative spark after a while. How do you stay inspired?

KEVIN BACON: I can tell you that acting is one thing, because to continue to be inspired to find something new to play or a new character, you’re doing somebody else’s words. When it comes to actually creating content or writing a song, it’s hard to know. If you knew where the genesis of a song would be, then you could just go there every day and try to write another one. I would say, and it really is true, that every time I finish a song, I think to myself, “Okay, that’s the last one. I thought of all the things that I could to write about.” And then turn around, and we’ve got a whole ‘nother record to put out. Like Michael said before, it’s just kind of shocking. So I think if you live your life and you keep your eyes open, keep your heart open, and you have experiences, then hopefully they’ll mold into something that you can put chords to and sing about.

The Way We Love will be released on July 17.

A Short Conversation with Kevin Daniel