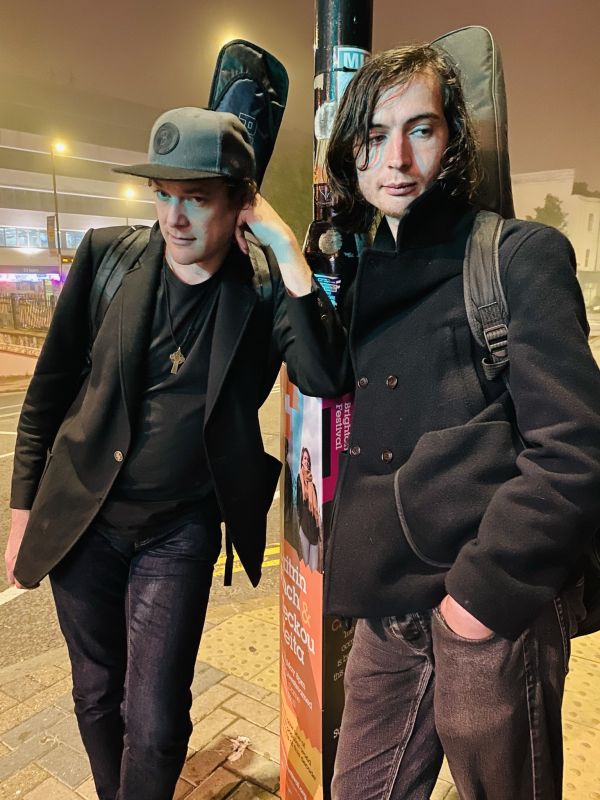 Having earlier presented ‘The Quiet Earth’ album, released by The Academy of Sun in 2020, in our print and online editions, we are pleased to share news today of the band’s latest news. The new exclusive label start-up Heaven’s Lathe is proud to present two new songs from this very special Brighton, England-based ensemble.

Curated by writer, broadcaster and DJ Graham Duff and made by Bladud Flies!, Heaven’s Lathe is dedicated to bringing out the highest quality 7” singles, releasing one each month, limited to a 100 copies, which comes on lathe-cut vinyl with engraved centers. As well as containing thrilling music, these are beautiful artifacts in their own right.

Referring to themselves as ‘queer, gnostic, orchestral post-punk’, their music is centered on the rich vocals and nuanced song-writing of Nick Hudson, whose work has been described by no lesser authority than Julian Cope as “Bill Nelson singing Scott’s ‘Angels Of Ashes’… highly fucking beautiful in a gazing together into Biba mirrors with smeared lippy kind of manner.”

A-side ‘It Is Finished When It’s Destroyed’ is a work in two movements. With squalls of feedback and a twisting bass line, the song opens with a sense of bruised optimism. The second section sees Hudson’s keening vocal riding over a battery of floor toms and fizzing synths. Mixed by acclaimed US producer Randall Dunn (Sunn O))), Danny Elfman, Earth, Mandy OST), this song bristles with detail and is truly cinematic in its sweep.

Flip side ‘Ghost Foxes’ is built around a constantly shuffling drum pattern and sharp slivers of staccato guitar. This is The Academy of Sun as questing rock band, with a sound suggestive of early Bad Seeds. Here, as in all their best work, the group strike a perfect balance between the cerebral and the primal.

“The first The Academy Of Sun track I’ve written since finishing writing ‘The Quiet Earth’ in 2018, this is an aquaplaning freight train of psychedelia and snarl – with the second part endlessly modulating over a skittery, syncopated drum pattern and Mariana Trench-plumbing synths. Whether it is lyrically directed at the heinous cabal of xenophobic disaster capitalists currently holed up in UK parliament remains to be seen (it is),” says Nick Hudson.

“‘Ghost Foxes’ was written for ‘The Quiet Earth’, but never felt “right” until we were asked to create this release. A satire on esotericism, boasting yet another Herzog quote and some mesmerizing guitar tones from our plank-wielder, Guy Brice, ‘Ghost Foxes’ was always riotous to play live, and will be again.”

On Friday, July 2 at 6PM BST, the EP will be released on 7” lathe-cut vinyl via Bandcamp This black hand-numbered 7” high quality stereo lathe-cut vinyl features an engraved Heavens Lathe logo, 230gsm sleeve, black inner sleeve and PVC protective sleeve. Ships within a white polylined paper inner sleeve and a ‘lathe cut’ care card and includes digital download. Otherwise, it is expected that these tracks will be made available digitally for the general public in mid-August.

If you’re not already familiar with The Academy of Sun, do check out their latest album:

And feast your eyes on their two latest videos: